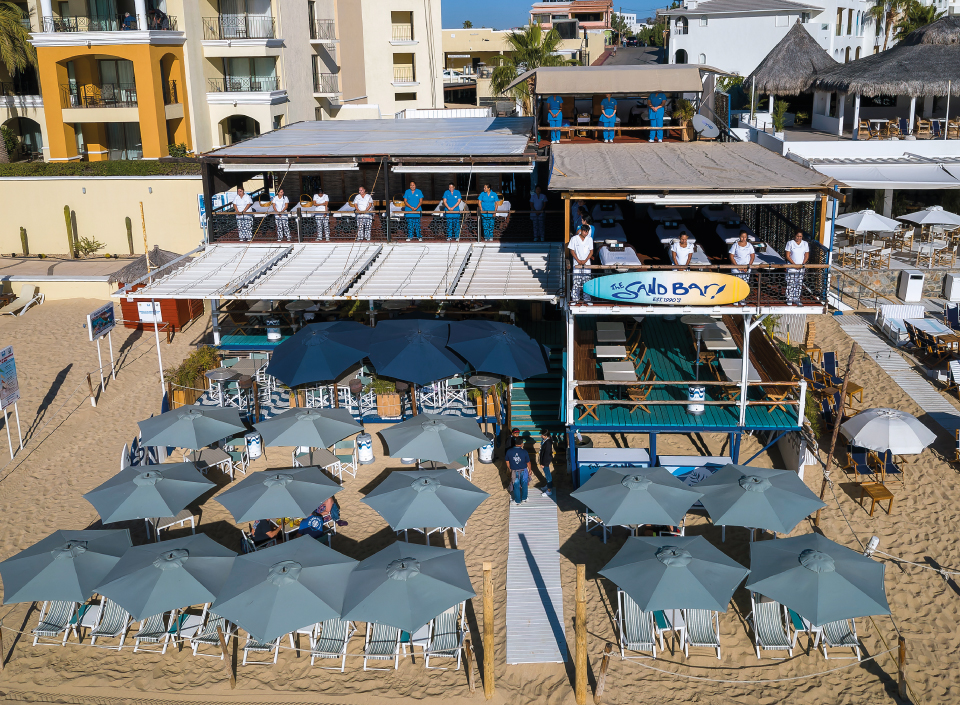 Juancho arrived in Cabo from Valle de Bravo, Mexico in the Summer of 1986 as a Commercial Helicopter Pilot for a local developer. In 1988 he married his wife, Doris, who started the first Montessori school in the area. In December 1999 they partnered up and started operating a Parasail boat in the bay of Cabo San Lucas. At the time, they lived in a tent on the site where the Me Cabo hotel is today. Every day they would walk down to the beach and set up an umbrella and plastic chairs next to a discarded, three-legged, rod-iron table at the end of the street where The Sand Bar stands today. They did this for a little over two years until they got permits from the Federal Government to set up a permanent, two-level structure which they called The Activity Center. By this time, they had incorporated a few more boats and rented snorkel equipment for tours out to Land’s End and Lovers Beach. In the spring of 1996 Doris decided to expand and started selling beers and hotdogs for the people waiting to go on our Glass Bottom boat tour to Land’s End- for a week, we called it Juancho’s Killer Dogs and Ice Cold Beer. After brainstorming for a better name, The Sand Bar was born. Today we have four menues (Breakfast, Lunch, Dinner and Bar Menu).

For years, Doris ran the Boats and Juancho operated The Sand Bar. In 1998, Doris experimented with a program called Get Hammer While You Get Nailed. Basically, it was a service for the ladies who were hanging out at the bar while their husbands were enjoying the football games on the weekends. This service included a foot massage a leg massage a pedicure and a bucket of beers or a tall margarita. It was an instant hit and there were full bookings every weekend. That is how Cabo’s iconic Massage Service was born. Soon after, we sold the boats and added a couple of beds and then four more and then six- today we have 30 tables and over 60 full-time therapists– all of which are vetted and supervised by Doris. An important element at The Sand Bar, is our social commitment to rescue abandoned and neglected dogs in the community. Please visit our Pet Recue page to learn more about what else we do with passion.